By Dmitry Tymchuk, translated by Voices of Ukraine

1. Not-suited-to-be-candidate [Oleh] Tsaryov barged in from Moscow (by the way, he flew in with Kremlin envoy Lukin and that speaks for itself), looked in Luhansk, and immediately thereafter the Luhansk regional council headed by self-proclaimed “governor” Bolotov announced a “referendum.” He also demanded from Kyiv to remove troops from the east of Ukraine and to stop the anti-terrorist operation (ATO).

It is not known how much money Tsaryov drew from Putin, but the little Luhansk deputies very accurately reproduced in their appeal earlier ultimatums from Moscow to the Ukrainian authorities. By the way, it remains a mystery exactly how many local deputies supported the bullshit proposed by Tsaryov with Bolotov.

2. Very dangerous things are happening on the border with Russia. The [Ukrainian] State Border Service records the blocking of border checkpoints by pro-Russian extremists.

There haven’t been any attacks yet. But it seems that if the Russian military need a “corridor” across the border, our border guards will have a very hard time.

3. Our servicemen are dying. Today, an “Alpha” soldier who tried to carry a wounded comrade from the line of gunfire, joined the ranks of the dead. He was killed by an explosion from a grenade.
We bow our heads to those fallen for the freedom of Ukraine. Every one of them is a hero.

By the way, yesterday, during a gunfight of the very same “Alpha” with terrorists, seven SBU operatives were injured, whereas 17 terrorists were killed–we determined the exact number of their casualties.

4. According to data from the Odesa regional organization of the Committee of Voters of Ukraine, either the Odesa police or the doctors sold the database of people who came to hospitals for medical treatment after clashes on May 2 to pro-Russian separatists.

The pro-Russian vermin immediately began to post the names and addresses of Ukrainian patriots on social networks, dripping saliva and threatening with revenge.

All these cowardly mutts can do is to attack from behind, bite and run off. But it’s dangerous when they attack in packs, and you are alone. I very much hope that the Odesa patriots will be able to mobilize to ensure they won’t get hurt. 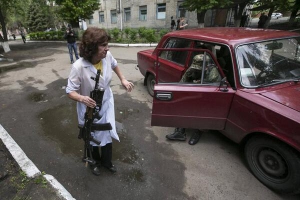 Wounded “colorado”: no more “Russia, russia”, now its “please save me”, and even gave up his gun.

1. The ATO continues. Unfortunately, not without oddities.

We do not fully understand the meaning of abandoning the security forces of Kramatorsk. As evidenced by our sources in the city, the terrorists have insufficient forces to capture the city under their control. But instead of a terrorist hell, they throw Kramatorsk adrift in flames of anarchy and the arbitrariness of the local petty criminality. Which isn’t much better.

But … it is better to have a muddy ATO than an extremely clear omission.

2. In Kherson, 36 instigators heading to Odesa from Crimea were detained during a special operation.

Counterintelligence works. And it inspires hope that the bloody scenario imposed by Moscow in the South will nevertheless fail. While it would be better if these visitors are neutralized at the border of the ARC [Autonomous Republic of Crimea] (although, again, [Ukrainian authorities] won’t detain everyone crossing the border–distinguishing Putin’s emissaries from the “tourists” is the task of security services).

3. This news is not so much good but ridiculous. Russian President Putin signed a decree awarding orders and medals to a large group of Russian media.

What a farce. The whole world laughs at these fabulists and mythmakers, who have no relation to journalism. Their crude ability to twist the truth and spread around propaganda pictures intended for a weak mind is pathetic. But Putin appreciates and honors them. Lies, in Russia, today, are an honorable business.

However, personally I thought that at least they are trying so hard for the money. But they serve for food and certificates. Well done.