Here is the most popular from all Donbass flags, some of you can already recognize it. It is probably the only one that has some historical background, however distorted and false it may be – a flag of People’s Republic of Donetsk. The colors are absurdly gaunt and appalling. People using such flag really have some issues. Red, blue and black were supposed to be the flag of some Soviet Socialist Republic of Donbass that lasted just for couple of weeks when Russia attacked Ukraine during the turmoil after October revolution. 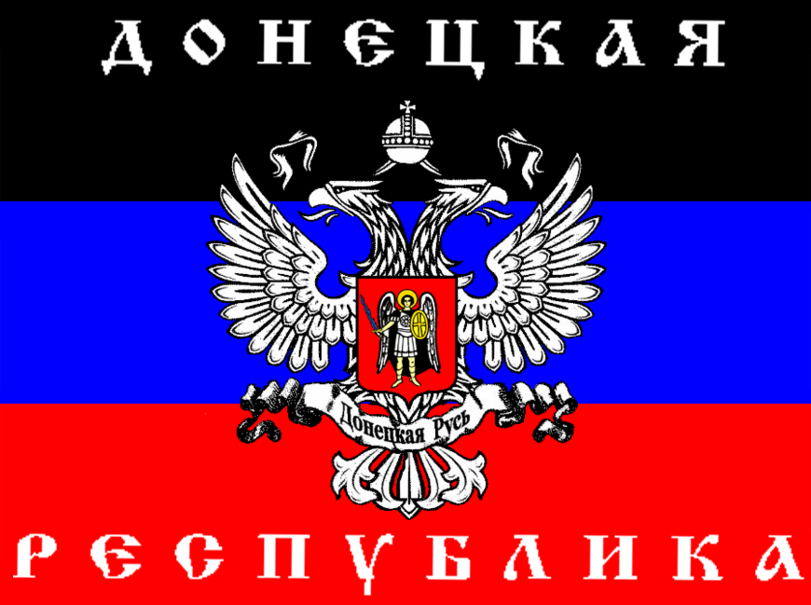 Actually they don’t really care about this Donetsk flag, so sometimes you can see reversed variant with the red on the top.

But why is there a Russian eagle in the middle? It is obvious and there shouldn’t be any doubts about the Russian input in it. An important thing: the flag appeared earlier that there were any serious actions in Ukraine and in Donetsk itself. So the symbol was first and then came the actions. And of course note the inscription “Donetskaya Rus'” – “Rus’ of Donetsk”.

Here is another flag, used in Luhansk. It does not have a history. It is called the People’s Republic of Luhansk. 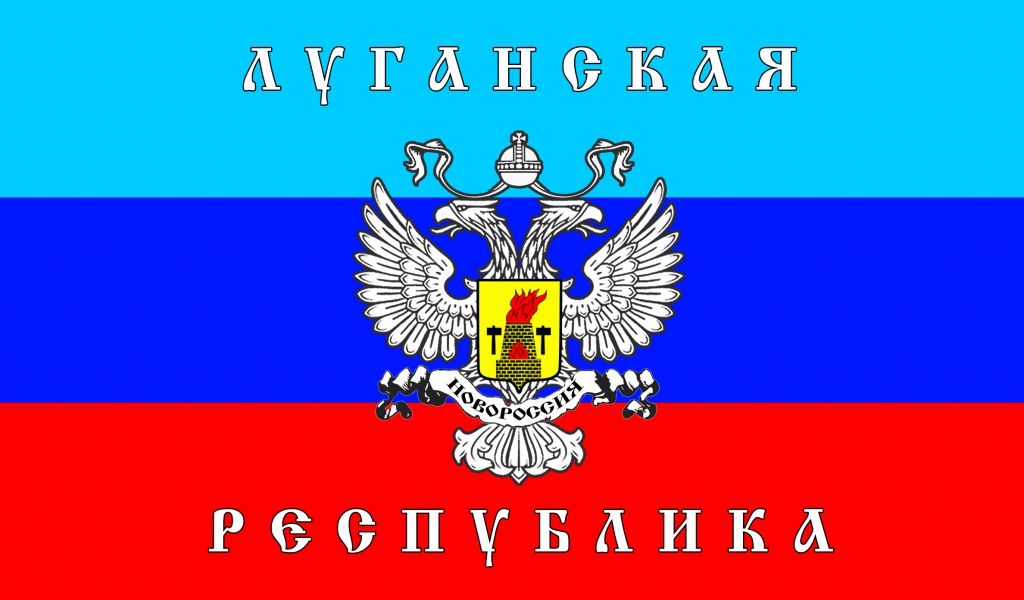 This flag was clearly made by some idiot who thought that there were two different blue colours in heraldry.

If you browse the Internet you may find different variations of the flag of People’s Republic of Luhansk. No one has even memorized it, it is that new, so they use the one they can get. But is it really so? 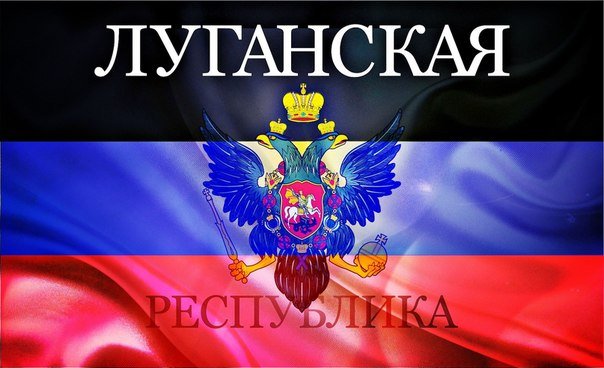 Another variant of Lugansk flag. It says something about the real situation with that “Republic of Luhansk”.

As we can see, the flag of People’s Republic of Donetsk, for some reasons, becomes the flag of Luhansk People’s Republic. It is, in fact, a story that there is no Luhansk Republic, it is nothing more than a branch of Donetsk Republic. This is reflected in the recent events – for a long time Luhansk was relatively quiet, but finally green men from GRU and various opolchentsy got to the neighboring area.

These people have also created other flags for non-existent republics. Here, for instance, is the flag of Kharkiv republic: 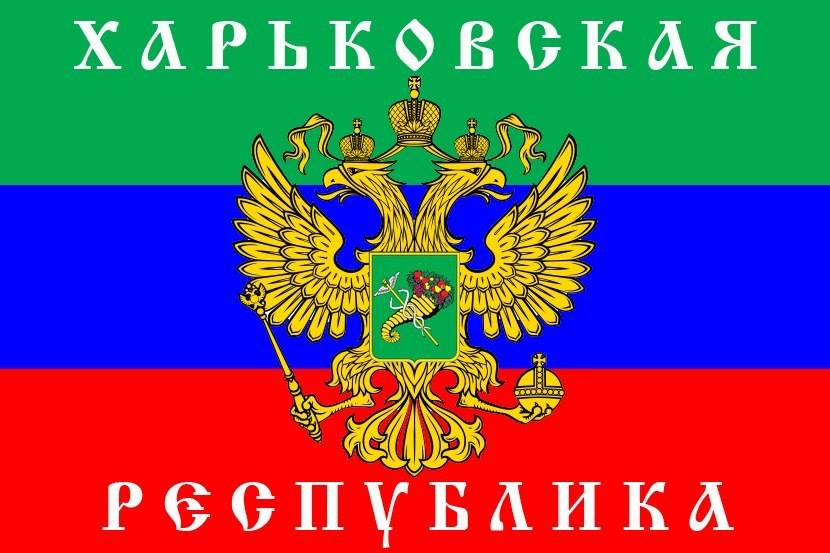 And here is the flag of the People’s Republic of Odessa. The Russo-fascists had quite a rampage there shooting the crowd from handguns and automatic weapons. After that there was a lot of noise when they were burnt under strange circumstances – they have been throwing and been thrown at with Molotov cocktails, but in the end, I don’t pity any of them since during the last months I came to know much about them, and not only from the side of Maidan, but also from Berkut. 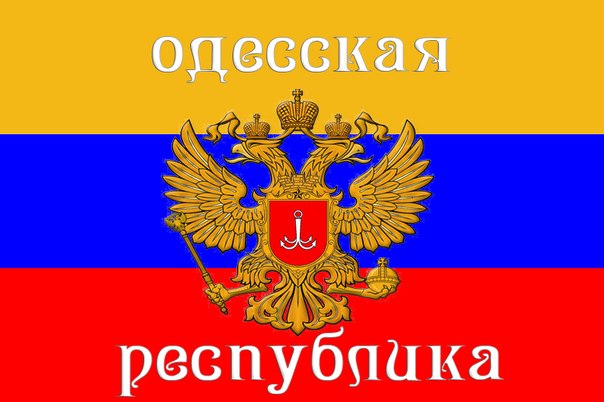 Flag for Odessa People’s Republic is wrong too. The strip at the top is so strange it is not even clear what colour it represents..

You can also find flags of Zaporozhye and Kherson. They are the same as the one above, of Odessa. Putin’s separatists don’t really care much and imagine those republics as a spaghetti and mix them up, and that says a lot: if they get mixed up, they really don’t have any intention of separation, they just want to demonstrate something. It is an artificial and unviable construct.

To have a complete image I give you the flag of the Republic of Dnipropetrovsk. Of course, such Republic never existed, local government, unlike in Odessa, Luhansk or Donetsk, did not wet their pants and dealt with such trash without many discussions. But look: 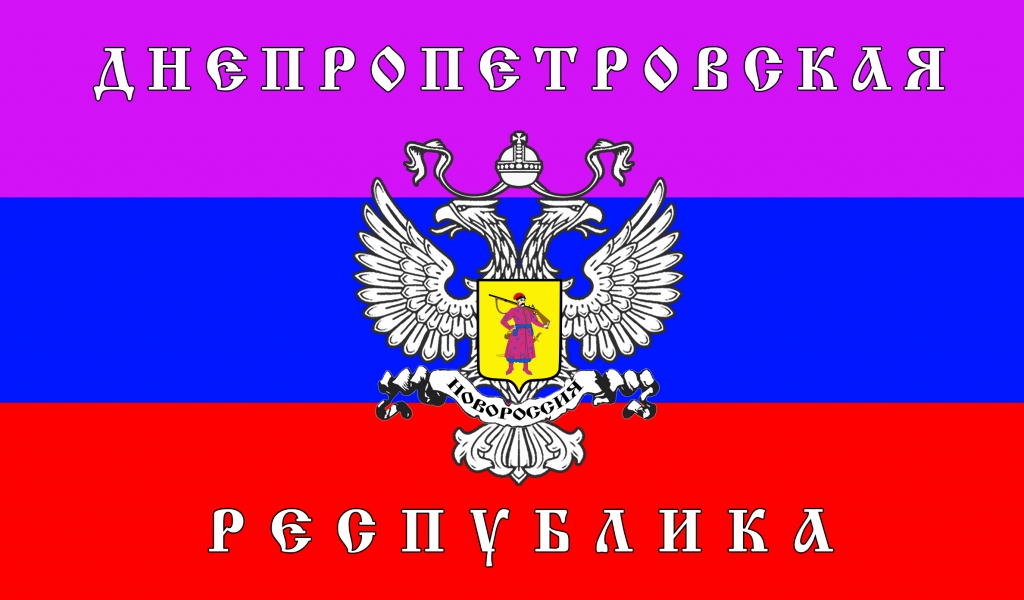 Such Dnepropetrovsk Republic didn’t even try to exist. But the flag is even more disgusting than the others.

Note that there’s Russian eagle everywhere. And that is beyond any doubt – all these pseudo-republics are just pieces of planned New Russia (what Vladimir Putin called Novorossya or something like that). Interesting thing – have you noticed how the two bottom stripes always match? What do they match? Russian nationalists use different bits of Russian flag – usually with eagle and some aggressive slogans, like “Russia Onwards!”

Since blue and red are assigned for bottom stripes, Luhansk had to use absurdly unfitting cyan, Kharkiv – appalling green, Dnipropetrovsk – a screaming violet (heraldic purple). There’s still orange and yellow left, but since they are not distinguished, it became one color. And it got mixed for different regions.

Now let’s get back to the Russian eagle. Some of you may have noticed a small detail – these morons managed to crown the eagle’s head with an orb, which is normally held in the hand. Utter morons.

The main idea here is that normally the eagle is rarely depicted on the flags, but here it is everywhere, as if it has some meaning (for comparison, we, Lithuanians, don’t put Vytis (Knight) on our tricolor). Let’s review such variation of a flag: 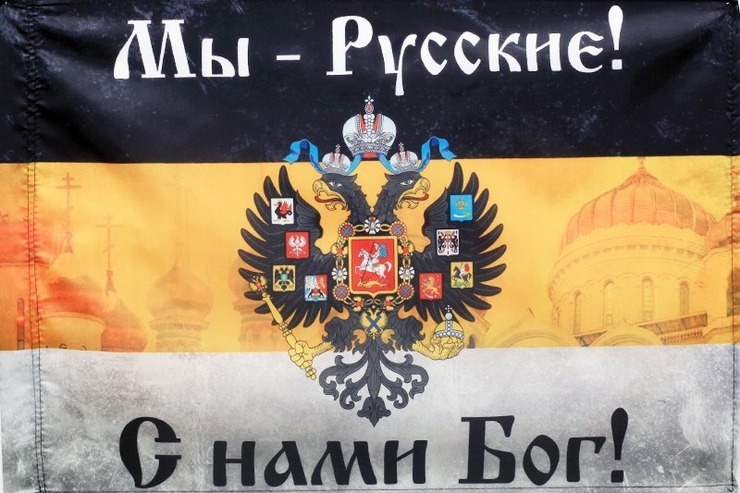 Black, yellow and white – that’s old flag of Imperial Russia. And message “We are Russians – God with Us” – clearly relates with “Gott mit uns”, used by Nazis.

Just to know the context: nationalist groups sprung up in Russia as early as the tsarist times, the black-yellow-white flag was traditionally used by the “black hundreds”. The same that organized Jewish pogroms throughout the Tsarist Russia. An organization “Pamyat” (remembrance), under the supervision of KGB, tried to resurrect the “black hundreds” around 1985.

Aleksandr Dugin, current ideologist of Russian nationalism who sparked Russian aggression towards Ukraine, annexation of Crimea and is an overall inspiration for Vladimir Putin. He is one of the early members of the organization “Pamyat” and founder of the Russian national bolshevist party.

The same “Pamyat” later on evolved to a set of different nationalist parties and groups, such as DPNI and similar gangs of latter day “black hundreds” (there is probably half a hundred of organizations that have thousands of members, and an unclear number of smaller ones). Some of them are marginally aggressive and are involved in murdering.

If we dig deeper we may find that the emblem of organization “Pamyat” was the same imperial Russian eagle but with swastika in the middle. This swastika is, of course, a deeply Russian, spiritual sign, that totally has nothing to do with nationalism, it is very very different, well, you get that. And, of course, fascines and stuff. But these are long stories about other signs, let’s not get carried away, the most important thing is that we reached the roots of the habit to put eagle on the flag.

And for the end, the solution to the riddle: that strange emblem with a shield and a sword pointing from top to bottom is an emblem of ChK, VChK, OGPU, NKVD, MGB, KGB and FSB. These are the organizations that engaged in terrorism, torture, killings, deportations, etc. 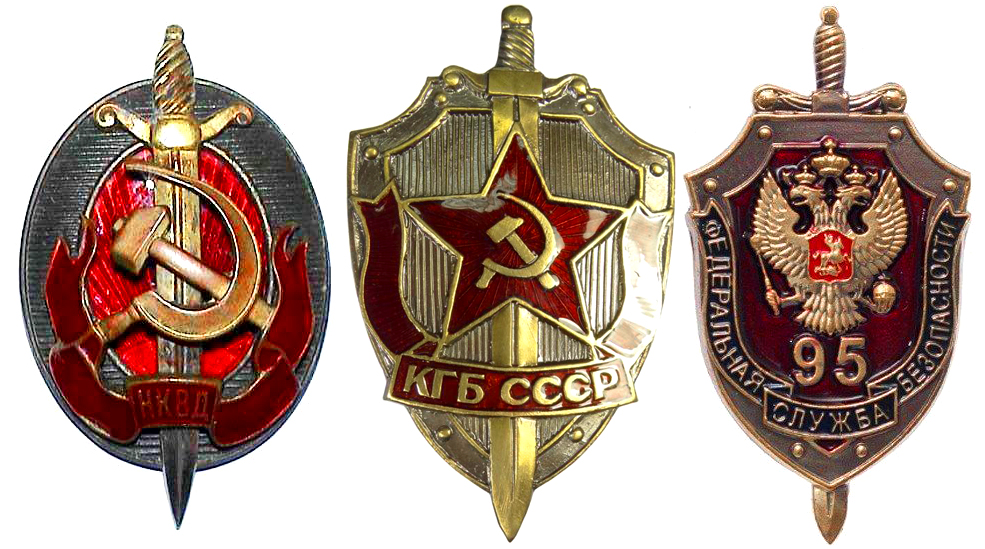 Shield with vertical sword – tat is the symbol of soviet State Security. It tells you one thing: FSB is still the same organization as KGB and NKVD.

As you can see, although the emblem has changed, it retained the same symbol – a shield with a sword pointing down. The flags of separatists in Slavyansk and Donetsk say it clearly: it is a project of Russian FSB. The FSB and KGB is a workplace of Vladimir Putin, he loves and nurtures it.

It is obvious: a shield with a sword that you see in the self-defense forces of People’s Republic of Donetsk (or whatever they call themselves) is nothing but a symbol, saying that they are KGB/FSB. They are proud of it and that is why they put it on their flags. And that is how we recognize them.

Symbols say more than their carriers, you just need to understand them. And that is exactly what we see here. It is semiotics, there really is no difference, how you express language – graphically, verbally or in any other way.

4 thoughts on Symbols of subversives from Donbas explained