END_OF_DOCUMENT_TOKEN_TO_BE_REPLACED

There are so many fake WWII veterans in Russia, Ukraine and other countries today. But many of them can be identified very easily – just analyze their decorations.

3. Twice the Hero of Soviet Union
27 remaining “double” heroes, of whom 24 astronauts and 3 aviators, no-one from NKVD.

4. Hero of the socialist labour
the only surviving “Hero of Socialist labour” and at the same time once hero of Soviet Union – V.I. Golovchenko, director of “sovkhoz”.

5. Seven Orders of Lenin
Throughout the history that many orders of Lenin were only awarded to marshalls Semyon Budyonny and Ivan Bagramyan, and also the first Minister of the Soviet-era Ministry of General Machine Building Sergey Aleksandrovich Afanasyev.

6. The Order of Alexander Nevsky
None of the staff from NKVD, MGB, KGB were awarded.

7. Three “Orders of the October Revolution”
triple award of this order does not exist.

Journalists of Donetsk have collected various rumours that are spread amid the participants of pro-Russian demonstrations. All of these rumors have been heard from the protesters. Some of them remind of wild delusions but this is no joke – the fear of war and informational vacuum create a perfect environment for even the most unlikely fantasies. The fear is the main factor igniting the separatist activities. And the stupider the reason for fear, the greater the fear becomes (and the shouts asking for Putin’s help get louder).

By the way, some 25 years ago, many similar rumours could be heard in Lithuania. This happened during the years of the struggle for Lithuanian Independence from the Soviet Union. Many of them were spread purposefully by the members of the Communist Party, KGB and Yedinstvo. It was difficult to quash these rumours and those residents who were doubting the need for Independence tended to believe them. 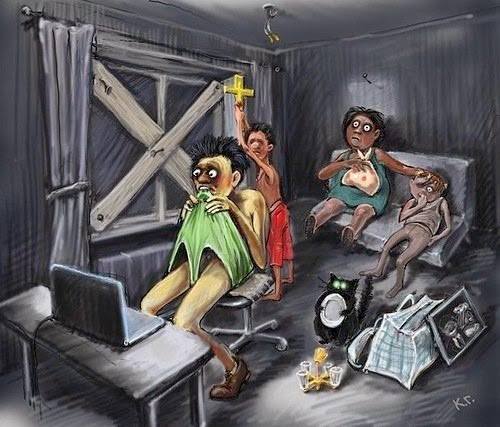 People panic when they listen to various rumours

We would like to repeat. This is not a joke. These are the real fears of the residents in Donbas. That is why people are demonstrating and asking for Putin’s help.

Based on the material by the Ukrainian “Informational Shield”.