About 2,000 residents of the Russian city Tyumen crowed in favour of federalization and Siberia’s joining the United States. Modeling after Kiev’s Euromaidan, they built barricades and a tent camp in the central square of the city. All fortifications of protesters were demolished using APCs (the armoured vehicles), while the protesters were shot at with large-caliber machine guns. That was the scenario of the training of the Internal Troops and the OMON (special police forces) of the Russian Federation, which took place in Tyumen on May 30, 2015. 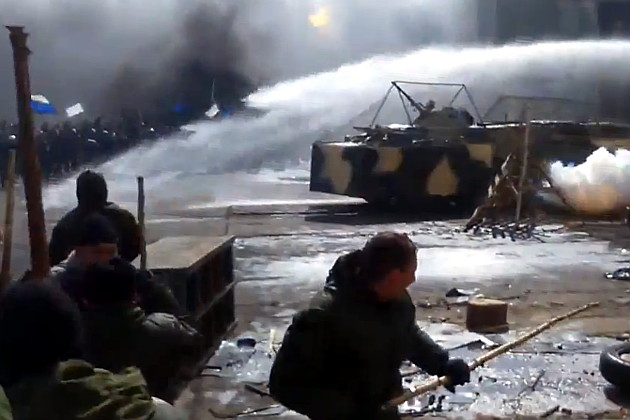 APCs with machine guns are used in police trainings

The video of the training taken by the participants of the event was placed on YouTube, where it already got several thousand views. In the video, the “protesters” (acted by police and military officers) are being chased out of the square by the security forces, using the military APCs, heavy machine guns, a special noise installation and a military helicopter.

Judging by the training, the Russian security forces are being prepared for a rather serious confrontation with the civilian population of the country, leaving it with no possibility to protest against the authorities: all protesters will be simply killed. It is clear that the Russian leaders are well aware of the economic crisis and its inevitable subsequent outcome in the form of a national unrest.

This is far from the first time such trainings of the Russian OMON and internal troops specializing in violent dispersal of protesters occur. The last one which also appeared on the Internet was held in April 2014 in the city of Saratov. Back then, more moderate methods of dispersal were delivered as part of training including no mass shooting using machine guns. Apparently, now the Russian ‘power structures’ have been instructed to act more aggressively towards the people of their own country.