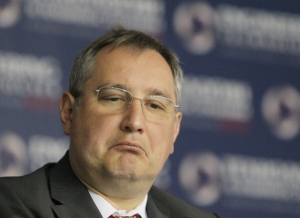 Romanian Ministry of Foreign Affairs expressed concerns about the Twitter message posted by Rogozin on May 10th. It states: “Following the demand by the USA, Romania refused to allow my plane to use its airspace. Ukraine also refuses. Next time I will fly with a Tu-160 (a strategic bomber aircraft, suitable for nuclear war – editor’s note)”.

After Romanian Ministry of Foreign Affairs published its press release, Rogozin stated in his Twitter: “Yes, dear Romanians, soon we will explain you, who you are and what we think about you.”

We remind you that earlier it was announced that Romania and Ukraine did not allow Rogozin’s plane to leave Moldova (Rogozin was in Transnistria). Later Ukrainian Ministry of Foreign Affairs denied Rogozin’s claim that Ukraine closed its airspace for him. “The story with Rogozin is like a joke about the “uncatchable Joe”. Why “uncatchable”? Because nobody needs him. Thus, he can only brag and boast”,- notes Ukrainian Ministry of Foreign Affairs.