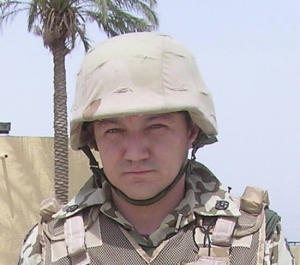 By Dmitry Tymchuk, translated and edited by Voices of Ukraine

1. Easter holidays brought no hope that Russia and the extremists pay any heed to the Geneva agreements. Extremist acts continue.

On the part of the security forces, sadly, we see no effective response, not even in blocking the loci of this infection. This problem must be addressed, and urgently. At this time, the flames of terrorism have engulfed Sloviansk and Kramatorsk. Unless urgent action is taken, the next few days will see the entire region covered in such “Sloviansk-s.”

Especially since we continue receiving information about the diversions and provocations being prepared. By the way, today a journalist voiced an accusation against Information Resistance group – alleging that we are instigators because we “forecasted” the diversion in Kramatorsk two hours before it happened. Supposedly, our messages are spreading panic among the public.

Personally, I think that’s bull. Panic is spread by the events, not by messages. What’s more, such events can be avoided by using incoming information appropriately. But alas, this issue is not for us to address.

2. The deadline for refusal of Russian citizenship for residents of Crimea expired on April 18, and will not be extended. This was reported today by Sergei Kalyuzhny, Deputy Head of the Federal Migration service of Russia.

Earlier, the self-proclaimed Crimean princelings (Putin’s henchmen) from the “government of Crimea” swore that this term would be extended. Clearly, they are just like their master – liars through and through.

The bad news is, that this lie impacts the fates of hundreds and thousands of Crimeans who became hostages of the situation. While Ukraine, for some reason, has not voiced a single word of alarm about their future. Let alone any real attempts to solve these people’s problems. Lord High Officials, after losing Crimea, let us not lose our conscience yet.

3. Nelya Shtepa, the mayor of Sloviansk, continues to play the part of some surreal comedy character. One moment, she is with the separatists; the next, she swears that her support was not genuine.

She reminds me of the unnamed drunken major from Evelyn Waugh’s Vile Bodies. Now and again, appearing out of nowhere, spouting some gibberish, and vanishing again. To what end? Nobody knows.

Today, in an interview with Russian TV channel lifenews.ru, Shtepa, once again, started licking Putin (“very grateful to Putin for entering Crimea”) and the insurgents (“they are strong in spirit, they will defeat both the Right Sector, and the military – they will defeat everyone here.”)

If I had any commentary on this lady’s personality, it would only be very rude. Being a gentleman, I will keep such commentary to myself. But the bad part is that such lovely creatures [as Shtepa] are supplying Russian PutinTV with a picture that Moscow so sorely requires.

1. The Cabinet of Ministers registered a bill on the amnesty of extremists with the [Verkhovna] Rada [Ukrainian Parliament]. This means an exemption from liability for those who didn’t cause too much trouble and decided to hand themselves over.

After the law is passed, the criminals have three days to make a decision. Personally, I’m not that in favor of cottoning up to terrorists. But in current conditions, this is still a good move, which allows those who unintentionally found themselves involved in separatism to leave this mess behind quietly. Let us see what results it brings.

2. Joseph Biden, Vice President of the United States, declared that the U.S. is entirely in support of Ukraine.

This means not only moral support in the current situation. This also means strategic perspective – for example, their readiness to help lower [Ukraine’s] dependence on energy resources supplied from Russia.

It should be understood that the very visit of the U.S. Vice President to Kyiv is already a powerful political declaration.

However, Joseph Biden is a rampant optimist. He says that Ukrainian politicians currently have “a historical chance” to create a truly united state. This, alas, is an illusion. Should Ukraine become truly united, it will happen through the efforts of Ukrainians themselves. It looks like the less our politicians meddle in this, the higher the chances for success.

3. The “People’s Militia” in Mykolayiv work together with the police, and successfully detain miscreants.

Today, the headquarters of the city’s “People’s Militia” reported that approximately ten pieces of traumatic and combat weapons were confiscated at block posts around Mykolayiv in the last few days; several people were detained.

This is a vivid example of a situation where people don’t expect favors from the law enforcement, but take the bull by the horns. This is especially important for the South. While everyone’s attention is drawn to the events in the East, the enemy keeps working here.

4. The Cabinet of Ministers allocated UAH 5.304 billion [USD 451.4 million] from the reserve fund of the State Budget for improvement of defense capabilities. Of this amount, the Ministry of Defense is set to receive UAH 3.1 billion [USD 263.8 million], the Interior Troops of the MIA, UAH 1.8 billion [USD 153.2 million], and the State Border Service, UAH 0.109 billion [USD 9.28 million].

This amount may not be that large, but the main question is how to manage it. Sadly, corruption remains a reality, and a thief in an official’s chair is a threat as large as an armed separatist in an ambush. I hope we can manage both of these types of threats.