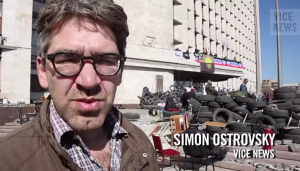 NTV, one of the leading Russian-language TV channels, has posted an article on its website boasting a stunning headline: Dual-citizen journalist turned out to be Right Sector informer (link in Russian).

As many of you know, during past few months Simon Ostrovsky has become one of the most followed Western journalists covering the Ukrainian crisis with his successful video reports. Ostrovsky, who was born in the USSR, currently resides in the USA.

Ostrovsky is held captive by pro-Russian insurgents in the Ukrainian town of Sloviansk since April 22. It appears that Russian media company accurately repeated the explanation provided by Mr Ponomaryov, self-declared people’s mayor of Sloviansk. Ponomaryov stated earlier that Israeli-American filmmaker was visiting Sloviansk with a purpose of providing information to the Right Sector radical movement.