Today, a protest against Russian aggression and occupation of Crimea was organized at the Russian embassy in Vilnius. In the words of one of the participants, MP Mantas Adomėnas, “it is shameful when historical memory and symbols of military achievements (Ribbon of St. George and the like) are used to feed hatred against the countries that finally liberated themselves from the Soviet slavery.

The country, which is still living on the scraps of imperialistic revanchism, has lost the right to talk about its “liberating” role in World War II, especially when after crossing the Lithuanian border the Soviet army became a murderous and destructive occupier, engaged in war crimes and genocide. That is why the 9th of May should not be celebrated in Lithuania”.

People came to the protest with Ukrainian, Lithuanian, US flags and NATO symbols. Some also had posters with slogans directed against Russian policy and military actions in Ukraine, asking why criminals and torturers deserve higher pensions from Kremlin (a recent decision by Vladimir Putin). 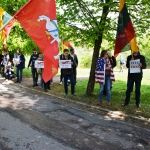 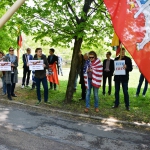 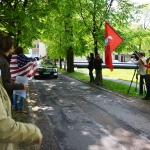 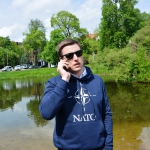 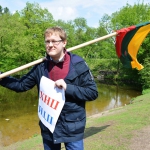