UPDATE (23rd of May): Bernard Grua, French activist,  is inviting everyone to peaceful protests against Mistral deal on June 1 in front of all French embassies, consulates, clubs and associations. More information: https://www.facebook.com/events/221560101386701/.

On 20th of May  a protest was held against the sale of “Mistral” warships to Russia at the French embassy in Warsaw.

Protesters think that the decision by French government to continue military contract with Russia, concerning the two modern amphibious assault ships “Mistral”, is “shameful and unworthy of a country which declares its allegiance to ideals of democracy”.

“We cannot remain silent, when a state which kills Ukrainians, can freely purchase warships. We wish to be heard” – said Natalya Panchenko.

Protesters showed their resentment by making noise with vuvuzelas and clackers. “Why do you want to kill us?”, “Supporting Russia in killing Ukrainians brings shame for France” said protester’s banners.

People brought a water pool for children filled with red liquid, which symbolized blood. Toy warships were floating inside.

“It symbolizes a sea of blood, where Russian ships sold by France are sailing… It is our blood” – explained Panchenko.

It was announced that for now, France is not going to make decisions regarding selling two modern warships “Mistral” to Russia, as possible sanctions for occupation of Crimea. It appears, that the French don’t even want to think about Russia supporting terrorists in Donbas. Nothing personal, just business… 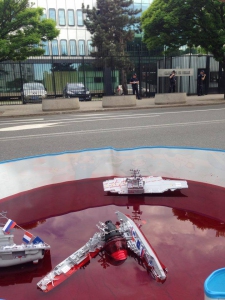 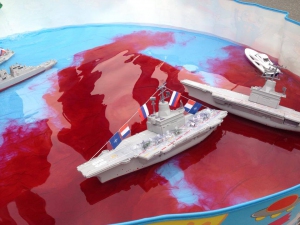 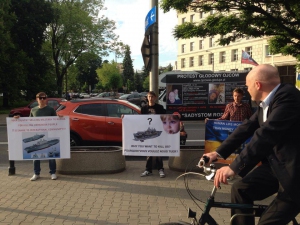 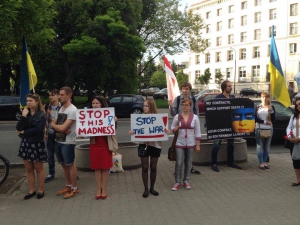