Russia is currently spreading the usual paranoid propaganda concerning the events in Sloviansk. The claim is that some gunmen from the Right Sector have attacked the separatist checkpoint and killed three or five people. Yet, there are inconsistencies in this story, and a lesson might be learned how to identify such propaganda.

People were killed, but there are no wounded

Usually, there are about five to ten times more persons wounded than killed in a shootout. This is well-known. If five people were killed in a gunfire, you can expect that there will be 25 to 50 people wounded. Where are they in this case? Well, they don’t exist. A long time has already passed but there is no information on the injured participants. Frankly, it seems, that there will be no such info. 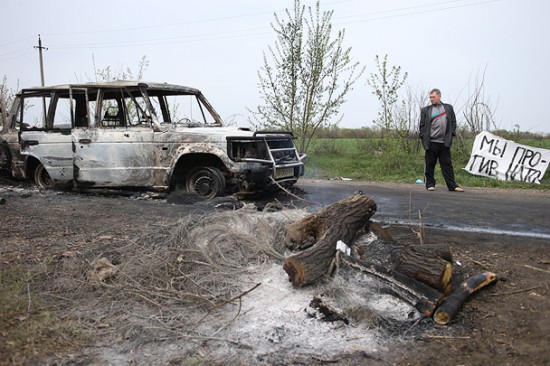 The burned vehicle of the supposed gunmen is standing near the camp fire of separatist. There is a barricade just twenty meters away. Do you believe that the gunmen came and parked in such an orderly manner?

Of course, there are cases, when there are less persons wounded than killed, but these are under exceptional circumstances. For instance, everyone (with a single exception of Tomas Šernas) died during the Medininkai massacre, which was carried out by the members of Riga and Vilnius’ OMON*. That is, one person survived, even when there were additional shots fired to make sure that everyone died there and then. Wounded and unarmed border guards were killed methodically. This is how the usual ratio of wounded-killed was distorted.

In Sloviansk, according to the separatists and Kremlin propaganda, some remained alive and forced the attackers to flee. Therefore, there should be a couple of dozens injured persons. Yet, there are none.

The burned vehicles of the supposed attackers further prove that all of this story is a falsification. They are standing some ten meters away from the barricades and very close to the separatists’ campfire.

Real raiders would never get so close to the enemy. It is foolish to come so close, park the cars properly, one after the other, and then attempt to shoot. Even total gawks would understand enough to stop the cars in such a way that they would remain undamaged, so that later they could be used to abandon the location. It is also self evident that the raid should be carried out in such a manner, that it would catch the enemy by surprise. When the vehicles are seen coming, the guards at the checkpoint will always have time to react.

In a realistic scenario, the cars would be left a few hundred meters away. But that wouldn’t work for propaganda, would it? The distance between the vehicles and the barricades can be easily determined by the differences between size of persons – it can be said that a wide-angle lens was used, and the photographer was close to the barricades (some 10-15 meters away).

Pay attention to the photo, in which the details can be clearly seen. Two cars are standing next to each other. This means that there was no hasty arrival. These cars were parked by the side of the road in an orderly manner. The door of one of those cars is closed. This means that people got out of the vehicle and then decided to shut it. Either that, or there were no people inside. Moreover, those neatly closed door are facing the direction opposite to the road. That is, they are on the side, which is commonly used by people to get out and which should be used by gunmen if they were to take cover behind the bushes.

After the cars burned down, it should be very difficult to open or close the door – destroyed mechanisms would prevent it and the door would become somewhat twisted.

It is obvious that someone came with those cars, parked them neatly, got out, closed the door and only afterwards the shootout began. Does it remind you of a gunmen raid?

Oh, and of course, later, undamaged evidence (found in burned down vehicles) implicated the Right Sector. The evidence included incombustible business cards of the leader of the Right Sector, Dmitry Yarosh.

Some more humbug. For instance, why did those supposed raiders from the Right Sectors dropped their weapons? So that they could be collected by the separatists and used as a proof of an attack?

Why did a Russian TV manage to broadcast news (and upload on the internet) even before the incident took place? By the way, right before the collapse of the Yanukovych regime, there was one other such failure. Then, a few media broadcasters provided more or less similar information about the attack of the Right Sector on the Ukrainian Rada. Afterwards, it became clear that that was rubbish.

One of the victims of the incident in Sloviansk is already identified. It’s Pavel Povelko from the Alexandrovka village, which is not far from Sloviansk. He had a wife and two children who are know orphans. His neighbors and relatives claim that the separatists needed victims and, therefore, they had to stage a Right Sector attack. That’s why they took him from the car, shot and burned down the vehicle.

Now, the propaganda stories about the supposedly captured gunman from the Right Sector are spread. He was hitchhiking nearby and told that he and the other raiders went somewhere to shoot someone. Does that even sound realistic? We can only sympathize with an innocent person who is forced do admit these false charges.

By the way, don’t you want to ask a question why journalists are now being kidnapped in Sloviansk? I guess that they  began asking the “wrong” questions. Just like I do here.

Such falsifications and intensified propaganda is characteristic of pre-war conditions. Yes, Russia is preparing for a war and is doing everything to convince its own citizens of the justness of such war. They don’t care that their claims are nonsensical – their citizens won’t know it, because the inconsistencies will not be shown.

They kill innocent people with one goal – to portray some imaginary Ukrainian gunmen and get a pretext for war. Innocent people become victims and are later depicted as separatists or members of the Right Sector.

—-
* By the way, the Ukrainian Berkut is also OMON, only renamed.