I met a friend in Dnipropetrovsk – he is a businessman from Konstantinovka, he has a retail shop network and trades spare parts for cars. Two weeks ago he fled his town. Reasons for that are explained below.

What happened to Donbas business? The story of Russian Bezler gang.

I had to flee when after ten days of captivity I was ransomed for 300.000 USD from the Russian special forces that are based in Gorlovka, in the building of Ukraine Security Service. 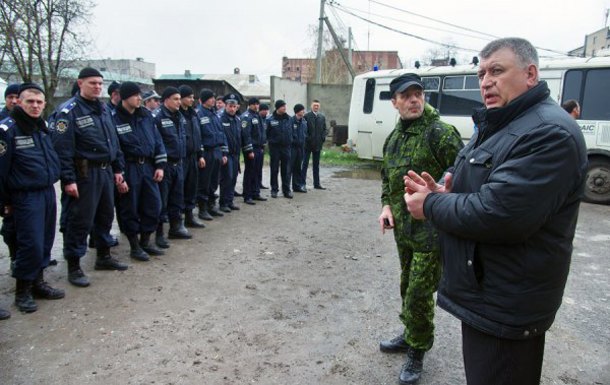 Igor Bezler (in the middle of picture, in green uniform) is an infamous GRU colonel that took over the control of corrupt Police forces in Gorlovka ar the start of events in Donbas

In April many people from our town were welcoming the creation of People’s Republic of Donetsk. Reasons for that are clear – many factories in Donetsk work only for the Russian market and have only Russian orders. I was in agriculture, we also sell the majority of our production to Russia. However I understand that Donbas is integrated into Ukrainian economy and infrastructure and Russia simply has no money to support Crimea and Donbas – if you separate those regions from Ukraine, you would have 9 million people at the time of crisis. I was trying to explain this to other people, but they did not want to hear. They wanted to be in Russia, hoping to secure their workplaces, get better pensions and naively expected that the rest of their lives will not change. Nobody thought that it will not be “polite people”, (“polite people” is a cliché used by Russian propaganda to describe Russian special forces that occupied Crimea) but real bandits that will come from Russia.

Information spread through town that “polite people” with Georgian stripes are collecting money from businessmen for the needs of the Donetsk Republic. I was not into politics and somehow thought this would not affect me, as my company is quite small. But everything happened very simply – when I got out of my car to go to my office, three men with machine guns, bullet-proof vests and “PRD” flashes came up to me and offered to get into their car. They took me to Gorlovka, where they had a base established in the building of Ukrainian Security Service.

They took me to a room, to a person in camouflage uniform. He was calm and kind, gave me a list and told me to find my surname. I looked through and saw that every businessman of our town was  on that list, and each surname was accompanied with a number. What was odd that some numbers were un USD, others in Grivnas. The sums varied from 1 to 15 million Grivnas. The number that was assigned to my surname was 250 thousand dollars. The military man asked:

– Is everything clear? Call your family, tell them to bring the money.
– But I don’t have that kind of money. Who would keep 250 thousand dollars at home, especially during such events?
– Listen, I am here not to persuade you, I have a plan which I have to fulfill. It is your duty to come up with the solution. Sorry lad, nothing personal, just business. Here’s a phone, call, start collecting money, meanwhile you will spend a night in the cell, think about everything. And you will stay there until I get the money. If you like the cell, you can stay there, if not – better get the money. Don’t be a problem to us. The only problem for us is “Right sector”, they would not be a good company for you. Is everything clear? See you in the morning.

I was allowed to make a call, then they took the phone away and I was taken to the cellar of the building. All premises there were turned to cells, each one filled with people. I was put in one, together with 3 other civilians, but we were strictly forbidden to talk.

The next morning I talked to the military men who did not introduce themselves. They were polite, for 10 minutes they calmly persuaded me to change my mind, and then sent me to the cell again. By the way, I have to admit, the food they gave to prisoners was good, and there were no threats. My “supervisor” was behaving like a military man, he was strict, correct, talked like a man who is used to give orders, had an official style. I remembered a scene from “Master and Margarita” by M. Bulgakov, when people in the theater were asked to give their gold and jewelry. Each day I was given a list, and I saw that more and more surnames had pluses added to them, it meant that the businessman had paid and was allowed to leave. I was allowed to talk on the phone. My family collected money from friends and acquaintances in all the district. No connections or good relations would have worked. What was interesting is that the man called the ransom “a donation”.

I was shocked when I found out that he had all the information about my financial state and activities. He justified the amount he was asking with exact data – what my income was, in which bank I was keeping my money, how much money I had in my checking account. I drew a conclusion that the amount of ransom was calculated using some unclear algorithm, but the initial data was taken from the databases of Economical police and Tax inspectorate. I tried to convince that after giving away this amount I would not be able to produce or trade in my shops.

After about a week we got accustomed with the man, he started talking to me for longer. He did not hide that he is not Ukrainian, some names of our towns were very funny to him – for example, Berdyansk. A day before my release when my family collected the necessary amount of money, he raised it to 300.000. He said that my captivity caused a lot of problems to them, there were talks, so I have to compensate for the inconveniences. Although I am sure he kept those 50.000 for himself.

An hour before my release he gave me a cigarette, we started talking, and I asked him a couple of questions:

– Judging from your age you must be a major?
– Good guess.
– Aren’t you afraid?

– Understand, this is my fourth war. It’s my job. Nothing personal. I’ll be here for one more month, then I will be replaced. I’m here for too long already, I was in Crimea only once, did not even swim in the sea, had to come here. And you don’t have a sea here.
– But what am I supposed to do? I can’t stay here with my family, if I get kidnapped again, I won’t be able to collect the ransom.
– I will be here for one more week. If they will take you again, I will release you, but after that… We have order here, we are military men, but from different groups. We have Cossacs, but we don’t control them, they are separate “firm”. We have Chechens, they are controlled by Ramzan. You don’t want to get caught by them. I would have never thought that one day I would have to bring order together with the chechens…
– So how am I supposed to work here? My company is ruined. I will leave, nobody will make contracts with me, the business will stop, I won’t have money to pay taxes.
– That’s temporary. Understand, that it is either us or the “Right sector” that will take away your money. When it will be Russia here, things will get better. As for the taxes, you don’t have to pay them to Ukraine, we exempt you. We don’t want your money financing Kiev, so they could by weapons and kill us. So consider that you made a donation and got a tax exemption and also attributed to our victory.
– Will Russia be here? Will they help?
– Definitely. As soon as the Ukraine is gone. We are here for it.

When they released me, I got home and we fled at once. My parents did not want to go. I found out that all our businessmen from Gorlovka, Kramatorsk, Konstantinovka, Makeyevka, Artyomovsk are paying to Igor Bezler. The insurgents do not limit themselves to money, they take payments in gemstones, jewelry.

All businessmen, including grannies in the marketplaces are paying to PRD. Everybody is paying and nobody is resisting. The cops tell you the amount, and you have to pay it, or close your shop. Almost everybody went bankrupt. There are constant robberies, so it is not possible to trade valuable goods, only something that is cheap. Today you won’t find a businessman who would support PRD. Everybody understands that the war will destroy Donbas, and PRD are not the government, they are just troopers who imitate government but don’t solve any problems.

As far as I know, only one man from our district refused to pay, he is a very rich man, lives in Artyomovsk. I was once in his place – he has a big house, a garage with racecars, motorcycles. He was visited right after my release. He owns the biggest agriculture company and has security. There was a real battle, troopers came from Gorlovka, but they were fired at, three were killed. Then Igor Bezler sent a whole squad with armored vehicle, they bombarded the businessman’s house from grenade launchers and big caliber machineguns. The battle was fierce. Businessman, his family and security men managed to escape, although some of them died. Now he joined the “Artyomovsk” battalion of MIA (Ministry of internal affairs), he wants to return home with a gun in his hands. It seems that there is no other way to save Donbas. None of the residents will come out to block the Ukrainian troops, on the contrary – everybody wants the army to come as soon as possible, so that the looting would stop. If we don’t do that, we will lose agriculture, there will be a lot of fugitives and it will take years to rebuild.

Addition from Yury Butusov: if you have doubts regarding the authenticity of this story, talk to any fugitive from Donbas or its residents that are still there. Then talk to the members of Donbas, Shaktyorsk and Artyomovsk battalion. They are locals. And when you will be in Dnipropetrovsk, I will introduce you (off the record) to some fugitives, including this businessman.

1 thought on What happened to Donbas business? The story of Russian Bezler gang.