For the first time in Ukrainian history, during official events dedicated to the anniversary of the ending of Wold War II, this year not Russian, but European symbols will be used. In order to commemorate those fallen, not the St. George’s Ribbon, but the red poppy flower will be used. This idea and the graphic realization of it was the result of cooperation of the Ukrainian Institute of National Memory and the National TV Company of Ukraine.

‘We propose a new symbol as a presentation of our respect for those who destroyed Nazism. This will be the red poppy flower – both a European and a Ukrainian symbol. In it said in our songs that poppies bloom where Cossack blood had been spilt,’ noted the director of the Ukrainian Institute of National Memory Volodymyr Vyatrovich. 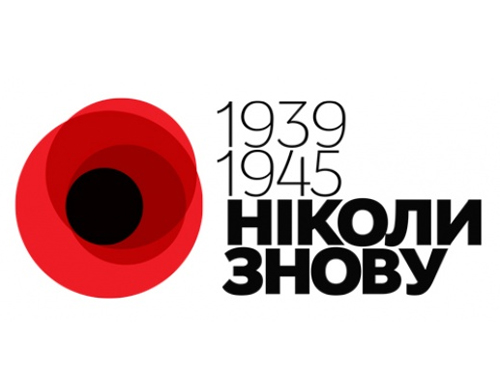 ‘The commemoration day, the day of the capitulation of Nazi Germany. The symbol has to be something notable, something that would symbolize not a holiday, which war cannot be by definition, but memory and mourning,’ added the head of the National TV Company Zurab Alasania.

The graphic representation – an allusion of a red poppy on one hand, and a bloody trace of a bullet on the other, – represents the essence of war, talks about suffering, death, heroism, about millions of dead – the most important things about war.

The logo also contains the motto ‘Never again,’ as it is in our power to prevent the repeat of the horrors of war, and the years of warfare: 1939-1945.

‘World War II was more than the Great Patriotic War. In particular, for Ukraine. For Ukraine the war began in 1939, and not in 1941,’ stated Kharkov designer, author of the logo Sergiy Mishakin.

Official events in commemoration of the ending of War World II in Europe and victory over Nazism will be conducted on May 8th and 9th. In 2014 and on, together with Europe and the entire world, Ukraine will begin the commemoration of the deceased on May 8th – on the day of the signing of the capitulation by Nazi Germany – and will continue traditional celebrations on May 9th.

In particular, it is planned to hold the symbolic event ‘First minute of peace’ on May 8th. As is known, the capitulation of Germany was signed on May 8th late in the evening. Strictly speaking the war ended on this day in Europe. Therefore this year Ukraine will widen the commemoration of the war, which should never be repeated.

We remind you that the organisation of solemn events in Ukraine on May 8th will also allow to hold a part of the celebration in unison with other countries of the anti-Hitler coalition: the UK, France, the US. And on May 9th the memory of those fallen in the fight against Nazism will be commemorated in the Park of Eternal Glory and on St. Sophia’s Square.

The Ukrainian Institute of National Memory is calling for the media and civil community to use the red poppy flower as a Ukrainian symbol of traditional celebration of victory over Nazism and the end of World War II in Europe.