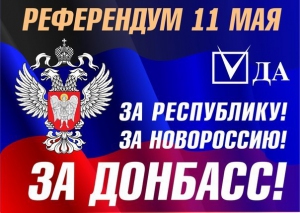 As announced by the Moscow-based “Fund of Slavic Literature and Culture” and some other outlets in Russian media, Moscow residents will be able to vote for the secession of the so called republics of Donetsk and Luhansk.

The announcement stresses that during voting, which begins at noon, a conference of representatives of republics of Luhansk and Donetsk, will be held at the voting point.