I took part in so-called referendum in Luhansk. Well… The attendance there will be not even 100%, it will be 150%. And not because everyone desperately wants to join Russia or create Luhansk People Republic (I have to acknowledge, those thoughts occur).

To “vote” I did not even need the passport. Nobody asked for it. I was signed, then I received the bulletin and here we go. Sometimes those who looked trustworthy get several bulletins. So to say, Russia in bulk. And… the voting cabins are not present in every station. Sometimes you have to mark the answers right at the desk of ‘regional voting committee’.

I had to step aside. My fellow countrymen recently started to behave aggressively, still I am not ready to vote for the creation of Luhansk Republic even while working ‘under cover’.

The OSCE Parliamentary Assembly called for the cancellation of “absurd” referendums in eastern Ukraine.

It’s not entirely clear why the OSCE is urging to abolish what they themselves called absurd. Ukraine itself has noted and explained why this action is clownery that has nothing to do with the referendum. The civilized world has supported it [Ukraine’s position]. What other questions can be asked about the sick fantasies of pro-Russian terrorists?

This bunch of alcoholics and simply inadequate personalities controlled from Moscow, could even declare themselves a Universal empire, and require our galaxy to pay tribute to them. But would this nonsense even be worth commenting on? It is comparable to asking mentally ill people to abandon their hallucinations. They need to be treated and isolated from society because they pose a threat to others, and they cannot be reasoned with. As announced by the Moscow-based “Fund of Slavic Literature and Culture” and some other outlets in Russian media, Moscow residents will be able to vote for the secession of the so called republics of Donetsk and Luhansk.

The announcement stresses that during voting, which begins at noon, a conference of representatives of republics of Luhansk and Donetsk, will be held at the voting point.

A group of terrorists with over 100 thousand pre-filled referendum ballot papers near Slavyansk, Donetsk region. A group of terrorists, who carried over 100 thousand fixed referendum ballot papers, has been arrested in Donetsk area.

During the anti-terrorist operation on May the 10th in Donetsk area, a group of armed terrorists was arrested.

“InfoResist”, quoting “Obrozrevatel” report, states that while carrying out the anti-terrorist operation near Slavyansk on 10th of May, a group of terrorists was arrested.

Additionally, an AK-47 automatic weapon, two Makarov pistols and two other weapons, used for shooting with pneumatic and rubber bullets were found in the car, as well as 60 AK-47 and 24 Makarov pistol bullets. 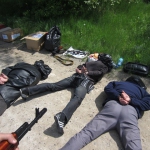 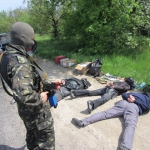 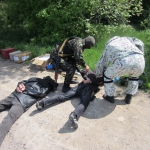 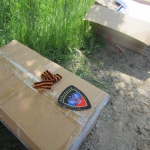 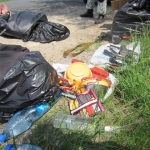