Despite a ban on any demonstrations by the Russian occupation authorities and a decision by the Milli Mejlis not to hold a mass commemoration lest it become the occasion for a Russian provocation, thousands of Crimean Tatars have assembled in their homeland today to mark the 70th anniversary of their deportation by Stalin.

Today (ed.-18th of May), all roads approaching Simferopol were under surveillance by the police and security forces, to make sure that Crimean Tatars weren’t able to get to their traditional May 18th rally in an organized manner. Most people decided to get to the rally separately. Russian security forces created artificial traffic jams on the main roads. So, many people ended up walking to the rally point at the Ak-Mosque/Kebir-Jami Mosque in pouring rain, leaving their cars behind. Moreover, there entire city was chock full of the ‘self-defense’ gangs with helicopters flying over. About 40 minutes after the the rally started, helicopters left and it stopped raining.

Despite all efforts to prevent the commemoration, several hundred people with Crimean Tatar national flags finally assembled in the Salgirka Park, and several hundred more met in the square in front of that city’s railroad station where the foundation has been laid for a future monument to the deportation which involved 200,000 Crimean Tatars, a large fraction of whom died as a result.

They were peaceful, did not use loudspeakers as in the past, and were surrounded by a heavy presence of Russian security officers. After brief meetings, they left in small groups via public transport and traveled to the predominantly Crimean Tatar Akmechet district away from the city center where they have joined more than 5,000 others

According to the Kryminform news agency, people from all parts of Simferopol as well as neighboring regions are at the meeting. They are carrying Crimean Tatar flags and slogans like “The Motherland! The People! Crimea!” And they are being addressed by longtime veterans of the Crimean Tatar national movement.

Also in attendance are representatives of the other peoples who were deported from the peninsula in 1944. In the air above the demonstration, Kryminform reports, there are two government helicopters. But as of this writing (0630 EDT in the United States), security officials have tried to enforce their regime’s ban on such meetings or reports of any clashes between them and the Crimean Tatars.

You can also read this photo report about commemoration in Simferopol: https://news.pn/en/public/104378. And Dmitry Tymchuk also writes about it here: http://maidantranslations.com/2014/05/18/dmitry-tymchuk-70th-anniversary-of-crimean-deportation-peaceful-rallies-in-crimea-today/. 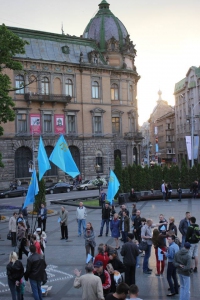 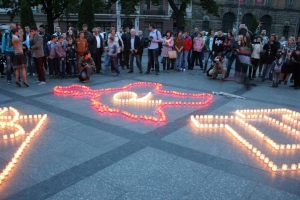 Dnipropetrovsk also held a rally commemorating the deportation of Crimean Tatars on May 17. The Crimean national symbol ‘tamga’ was formed out of lit candles on the bank of the Dnieper river. Representatives of the Crimean Tatar community as well as Ukrainians and people of other nationalities participated in the gathering. The activists plan to ask the city authorities to grant them a flowerbed where volunteers will make a ‘tamga’ out of planted flowers.

Beyond the borders of Crimea, there have been meetings and declarations of support for the Crimean Tatars and their cause from governments and public organizations around the world. The quiet courage the Crimean Tatars have displayed in coming out today in the face of a new wave of Russian repression will only gain them and their cause more support.

And consequently, while the number of Crimean Tatars taking part in this year’s round anniversary commemoration is smaller than the 30,000 who have typically gathered in recent years, the event this year has achieved even more for the Crimean Tatar cause and its fight for justice than did any previous meeting.

On 17th of May Street Music Day will be held for the first time in Kiev, Lviv, Ivano-Frankivsk, Dnipropetrovsk and Odessa. Lithuanian artists will arrive to support European Ukraine: groups ‘Biplan’, ‘Dee&Kammy’, ‘Colors Of Bubbles’, Jurgis Didžiulis will perform in Kiev, Edgaras Lubys/Amberlife and percussionist Donatas Senkus – in Lviv. (veidas.lt, vz.lt, delfi.lt, 15min.lt)

On 16th of May Vytautas Leškevičius, Lithuanian Vice-Minister of Foreign Affairs, and Valeriy Piatnytsk, Government’s Commissioner for European Integration of Ukraine chaired the 10th meeting of the Lithuania-Ukraine Commission for European Integration. The Commission meeting discussed the creation of a coordination mechanism for European integration in Ukraine, Ukraine’s progress towards a visa-free regime with the EU and possible Lithuania’s expert assistance to Ukraine in the implementation of the Association Agenda. The representatives of Ukraine pointed out that they highly appreciated Lithuania’s support and consultations. (Ministry of Foreign Affairs information, ELTA, lrytas.lt)

On 16th of May Anders Fogh Rasmussen, NATO chief, said that ‘he could no longer trust Russia’s assurances on sovereignty and the territorial integrity of countries in the region after its annexation of Crimea’ (vz.lt, lrytas.lt, 15min.lt, delfi.lt). Read more in The Times of Israel: http://www.timesofisrael.com/nato-chief-no-one-can-trust-russia-after-ukraine/#ixzz31u0kaIJu.

On 16th of May second United Nations report about human rights situation in Ukraine was published. It says that ‘human rights violations have escalated in Eastern Ukraine and serious problems are emerging in Crimea, as well as a “wave of abductions and unlawful detentions” of journalists, activists, politicians, representatives of international bodies and members of the military’ (delfi.lt, lrytas.lt, 15min.lt). Read more in Reuters: http://www.reuters.com/article/2014/05/16/us-ukraine-crisis-un-idUSBREA4F05Y20140516.

On May 16th Helmut Schmidt, former Chancellor of Germany, said that ‘Ukraine’s crisis reminds the eve of World War I and danger that situation will become more tense, as it did in August of 1914, is growing everyday.’ (delfi.lt, balsas.lt, 15min.lt)

Today European Union opened its markets for Ukrainian commodities by applying one-side duty concessions. Reduced or completely eliminated Ukrainian commodities import to EU tariffs will be valid till this year November 1st or until the Association Agreement between the EU and Ukraine will be signed. (BNS, 15 min, delfi.lt, vz.lt)

On April 29 the exhibition Frumušika Nova 2010 / 2014 dedicated to Ukrainian democracy support will be opened in Vilnius St. Johns street gallery. St. Johns street gallery brought together artists, who participated in plain-air Magnus Ducatus Artis – Frumušika Nova held in Ukraine in 2010. Staff of gallery encouraged artists to remember 2010 plein-air and ideas that were born during it. This exhibition is the first time the canvas by painters Linas Liandzbergis, Audrius Gražys and photos of photographers Arturas Valiauga, Vladas Braziūnas, Alis Balbierius created during the plain-air will be presented publicly. (BNS)