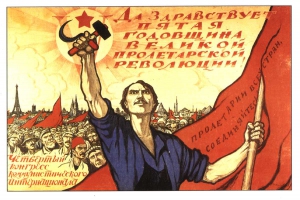 There was common pattern for all the communist revolutions around the world.

It all started from people rising up against Viktor Yanukovitch rather than any actions undertaken by Russia. Maybe this inverse was what made people miss the old Russian invasion pattern appear in Ukraine. Or was it because we were used to seeing the pattern develop from the other side?

The pattern is old, having undergone first trials about a century ago. As time went by, it was refined, well drilled into everyone’s mind, until it was finally made into a set of standard invasion plans. A whole systemic methodology of invading other countries that, when the time came, only required minor adaptations.

Talks that Vladimir Putin is waging info war like no one has done before are, at best, naïve. He is not creating anything new or revolutionary; Putin is barely taking the well drilled KGB invasion plan and adapting it to current needs. Those methods are a dead ringer to the best hits of USSR invasions.

The entire thing is usually done under the cover of standard bullshit. It all goes through several structural channels: leftist commie cells from around the world, official soviet press and through various press offices in Moscow that publish left and right, trying to pass off their bullshit as something that the locals wrote themselves. In the good old days, newspapers printed in Moscow were presented as supposedly printed somewhere else. Today, the same things goes on the Internet.

We have to pay attention to the real thing: the invasion pattern. A series of events that happen concurrently with a Bolshevik invasion. Then we see, time and time again, a same pattern emerge with only the slightest of adaptations.